Leading representatives of the sensation method came together for the congress of the World Institute of Sensation Homeopathy (WISH), held in Munich from May 12-14, 2017. They showed how the exploration of traumatic experience at the level of the vital sensation can facilitate deep-acting prescriptions.

Anne Schadde was the first of the 17 assembled experts from all over the world to address the gathering, with her case of a woman who buried the early experience of her brother‘s death deep inside herself. An innocuous stimulus triggers the surfacing of the deeply buried unconscious trauma, associated with feelings of guilt originating in childhood. The homeopath and psychotherapist explained how the limbic system stores events which can later emerge in an uncontrolled way. Black tourmaline corresponds to the picture of deeply buried emotions, an outer hardness and dogged perseverance. It heals the patient‘s autoimmune disease and the sensation of darkness that she has felt in her life ever since childhood. 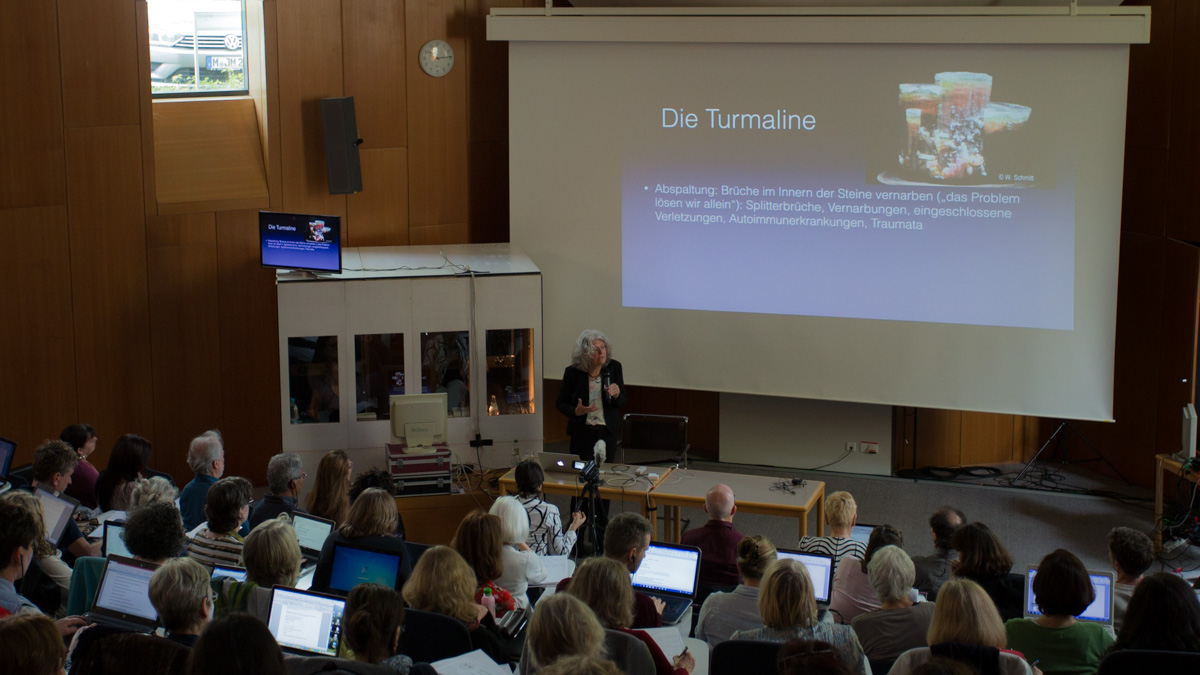 A psychological trauma can have a direct physical effect, impeding the organism‘s self-healing mechanisms. The sensation of Boraginaceae in general and Symphytum in particular was elucidated by Willi Neuhold in a case of a fractured cervical vertebra, in which a callous only forms after the remedy is administered. His video presentation leads via precise observation of the patient‘s hand movements to the recognition of how exactly the patient‘s physical and mental dynamics correspond to one another, as exemplified in the polar sensations of this plant family: “growing together / merged” versus “pulled apart / torn.”

Jörg Wichmann vividly portrayed how strongly post-traumatic stress disorder can impact a young woman’s life. The plant family of the Papaveraceae is known for the sensation of shock and intense pain. Dulled, fatigued, worn out: this is the passive reaction in the remedy picture of the Poppy family. In the case history, Sanguinaria restores the patient’s vitality, which disappeared following a severe fall during training, and even prevents renewed traumatization after a subsequent accident. Sanguinaria represents the sycotic miasm in the Papaveraceae.

The effects of many years of severe child abuse often result in depression, anxiety and eating disorders, as in the case of a woman presented by Mike Keszler. Lithium-carb helps her to overcome the loneliness plus the feeling of inner emptiness and of being detached from life. She is therefore able to become whole again and leave behind her “old life.” Both Jörg Wichmann and Mike Keszler make use of Michal Yakir’s evolutionary stages when selecting the remedy. Lithium carbonicum is indicated for people whose developmental stage is comparable to that of a fetus, completely dependent and without any kind of independent existence. Such people can often develop profoundly serious depression. 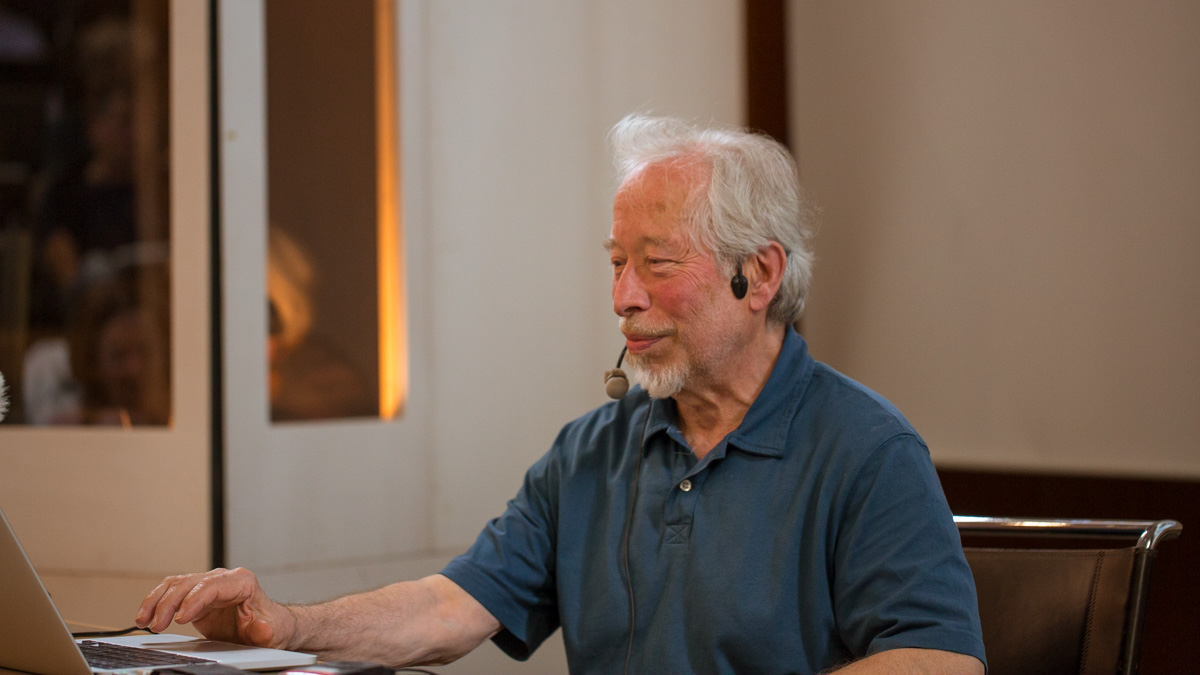 Misha Norland presented the cases of two children: a boy with life-threatening nightly asthma attacks is helped by Plutonium nitricum, which is identified from his dreadful nightmares together with the mother’s history. The second boy displays compulsive behavior. He was born prematurely and spent some time in an incubator, a state that closely resembles Lithium. Beryllium, which follows Lithium in the periodic table, turns out to be his remedy. A sketch by the boy at the age of five appears to be an exact anatomical representation of the inner female organs and confirms the choice of remedy from the second row of the periodic table.

Another highlight of the first day was Karim Adal with his special style of casetaking, shown in two cases that produced very similar sensation words but required very different remedies – Thuja and Zincum. He takes his patients to the level of the unconscious and gently works through the trigger situation with them. In this technique based on the approach of Jayesh Shah, the painful identification with the traumatic experience is followed by a phase of dis-identification from the problem, ending in a transformation from the negative experience to a positive perception of one’s own potential. This process itself induces healing but often leads via the deep sensation level to an effective and enduring simile.

On the second day Annette Sneevliet picked up the theme of evolution. As in Keszler’s case of Lithium carbonicum, her patient is also completely dependent. She reacts to her husband’s diagnosis of cancer with panicky and clingy helplessness. This is really all about her, not her sick husband. After many incorrect attempts with mineral and plant remedies from a primitive level of development, Spongia brings the breakthrough. Like many aquatic invertebrates, the sponge, which clings to the cliffs, is at a low level of development in the animal kingdom. The patient suffers panicky fear that she will lose her husband, who is her pillar of strength. With Spongia she gradually overcomes the feeling of a helpless child, becoming an adult woman with both feet firmly on the ground. 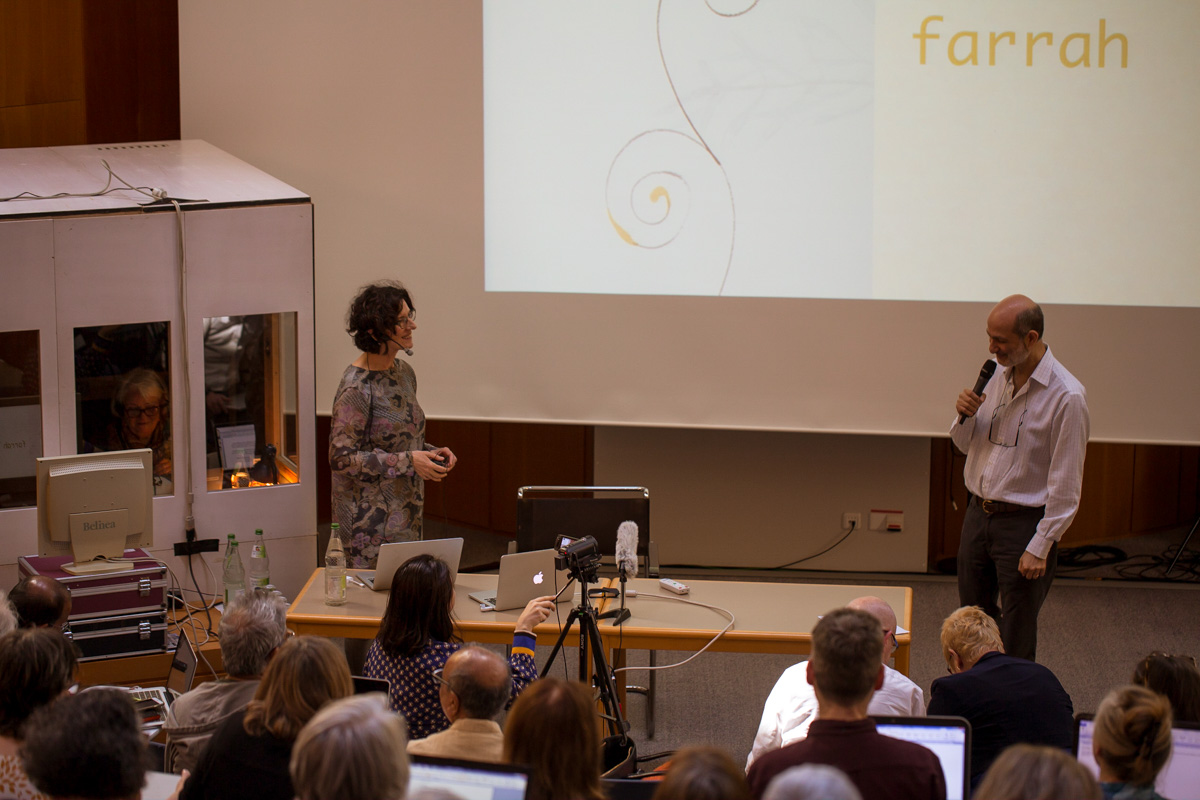 The Canadian homeopath Laurie Dack presented a video – yet her case of a very ill patient, described in almost poetic language in an empathetic tone of voice, would have been moving enough without any images. The combative, committed and always active Farah fell into disgrace in the Iran of the Ayatollah, where she was brutally tortured during three years of imprisonment. She remembers nothing but her body stored the pain: tearing, stabbing pains as if from a knife and swollen, deformed, and crippled joints. Movement is a torture. Everything is distorted, bent, hardened and stiff. The doctors diagnose rheumatoid arthritis. She says: “I’m contracted in spirit, body, and soul.” She keeps wanting to stretch. This polar symptomatology leads to Guajacum, a small crippled tree with heavy, dense wood used for shipbuilding and truncheons. With this remedy her pain, mobility, appetite, and sleep all improve. She is once again able to get in touch with her family and other people. With the resurgence in life energy her memories return and she is again plagued by nightmares. Farah has to reassure her despairing homeopath that she feels she is now back on the right track, even though the remedy is bringing repressed memories back to consciousness.

Such “imprints of the trauma in consciousness from beyond space and time” were also the topic discussed by Jayesh Shah. Karim Adal’s presentation had already sensitized the participants to his particular approach to traumatized patients, which often requires the therapist to spend many hours on a journey of healing together with the patient in order to transform their injury and pain. When patients at the end of such a journey recognize that they themselves possess the healing life energy, they can see themselves in a new light and may be able to let go of the ill-making patterns of the past. The homeopathic remedy completes this process of healing. In a case of unbearably painful urticaria with delusional fear of the amputation of a leg, the required remedy is Codeinum. In another case, the healing journey of transformation means that a European woman with deeply rooted and agonizing panic attacks first needs to relive the experience of her father in a concentration camp in Nazi Germany. She is given various remedies based on hydrogen and nitrogen. 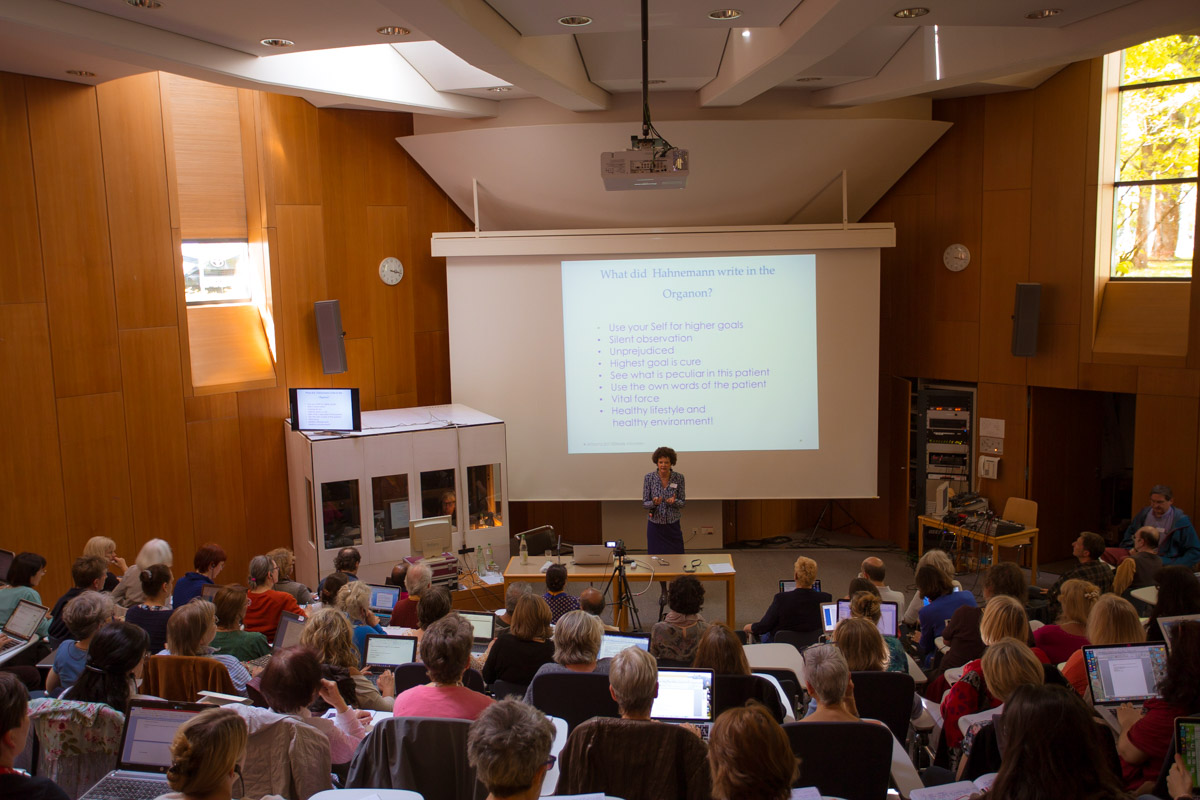 Resie Moonen presented two neurological cases characterized by a traumatized childhood that require the same remedy sequence: Cerium oxydatum followed by Acidum oxalicum. The different traumatic experiences of the two patients nevertheless lead to similar reactions: withdrawal to a cocoon, a hermetically sealed bubble without connection to the outside world. In independent and autonomous people with autoimmune disease this pattern invariably calls to mind Cerium. Abuse in the history of one patient and a suffocating mother in the other patient point to the oxygen component found in Cerium oxydatum. The oxygen is also found in the Oxalic acid, the follow-on remedy in both cases. The repertorization of very different symptoms leads to this same remedy. Just a coincidence or maybe an indication of a specific remedy affinity?

Bob Blair’s female patient, who presents with a rare neurological form of coeliac disease, also complains of childhood abuse with anxiety, panic attacks and muscle pain. She received psychiatric treatment for her depression. Expressions such as “isolation, death, dying, hopelessness, helplessness, like being imprisoned in a grave, like being battered, violence, god, possessed by the devil, living in hell, despair, damnation, on the verge of insanity, threatening destruction“ are all covered by the nightshades. Due to the feelings characteristic of the leprosy miasm – dirt, shame, and feeling ostracized – the chosen remedy according to the sensation method is Mandragora. It is confirmed by repertorization but chiefly by sustained improvement on all levels.

The death of a partner is one of the most drastic experiences in life, even if one does not feel so helpless and dependent as in the cases of Lithium and Spongia. The case presented by Bhawisha Joshi featured a 58-year-old banker who, following the death of her husband, falls into a state of severe depression with anxiety, nightmares, sleeplessness, migraine and backache. The woman was previously always fit and healthy, traveling the world with her husband, but now she just wants to follow her “soul companion”. Only the sense of responsibility for her adult children and her grandchildren are holding her back. The care of the family, the cooperation with her partner, the traveling and other themes in the case lead the Indian homeopath to the bird remedies. Joshi also works with evolutionary biology and showed with this case the relationship between the developmental stages of the animal kingdom and the rows of the periodic table. The reactive depression of the banker was finally healed by Phoenicopterus ruber, the American flamingo.

The third and final day of the conference began with Dinesh Chauhan’s amusing story from the Kama Sutra. A famous courtesan covers her body with a cloak made of 500 separate pieces, which her customers have to remove piece by piece. Thanks to the accompanying ingestion of alcohol, the customers generally fall asleep during this endless procedure and the courtesan is able to remain unmolested. But the cloak had a “master key” – a clip that, when pulled, releases the entire cloak so it falls to pieces. This is analogous to – and now the story returns to homeopathy – the decisive, central observation in casetaking, the “master key,” which lifts the veil, revealing the patient’s morbid pattern and the disturbance in the life force. His impressive example backed this up: a patient with ankylosing spondylitis and a childhood trauma starts in Dinesh’s casetaking for the first time in his life to take about how, due to his appearance, he was teased as a child and how he felt great hate towards his tormentors. 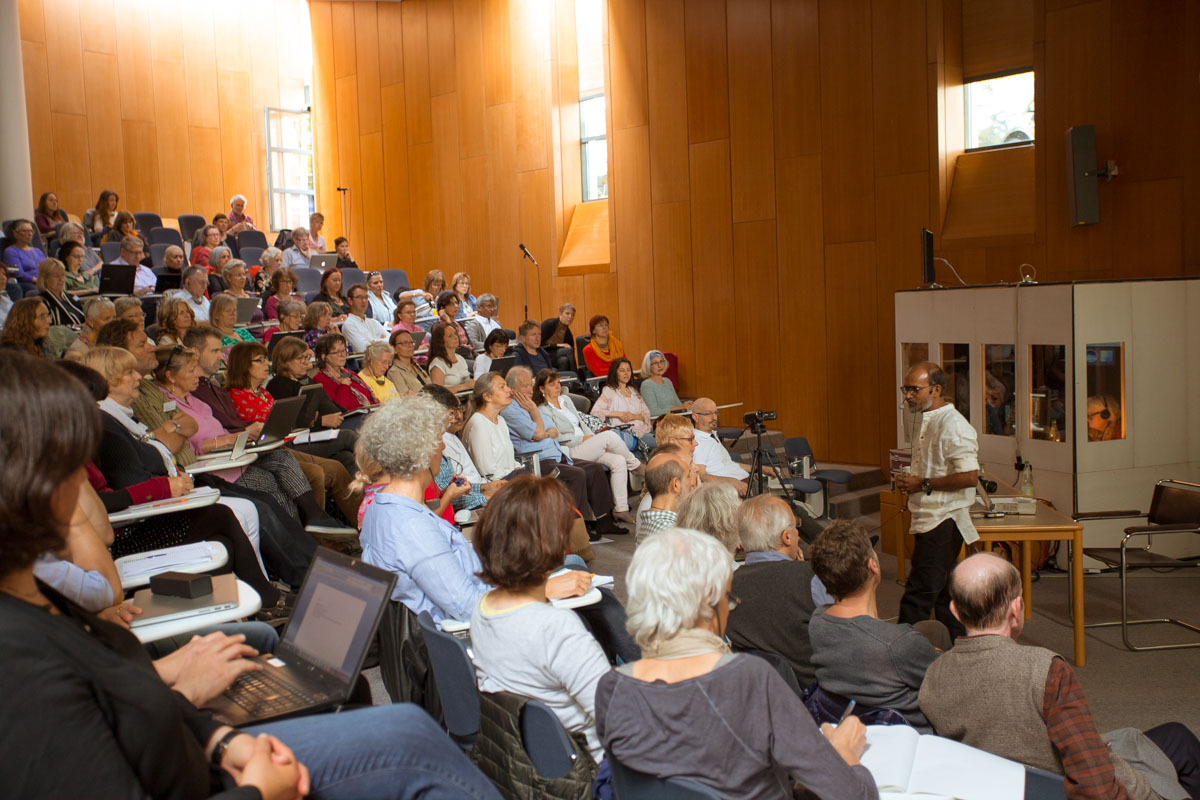 As he grew up, he began to train and become tougher: “I turned from a rabbit into a lion”. He described a series of violent dreams and fantasies as well as real gang fights. It gradually became clear that he had identified completely with the African honey badger, which even fights and gets the better of lions due to its unrelenting aggression. The European badger (Meles meles), for which there is an extensive remedy proving, is in fact the remedy that heals the patient, since it most closely resembles his pathology, which otherwise has a very poor prognosis. A supportive atmosphere during casetaking and the knack of addressing the question of the “master key” at the right moment was here able to turn around the life of this person who had sought lifelong refuge in a very aggressive behavioral style. 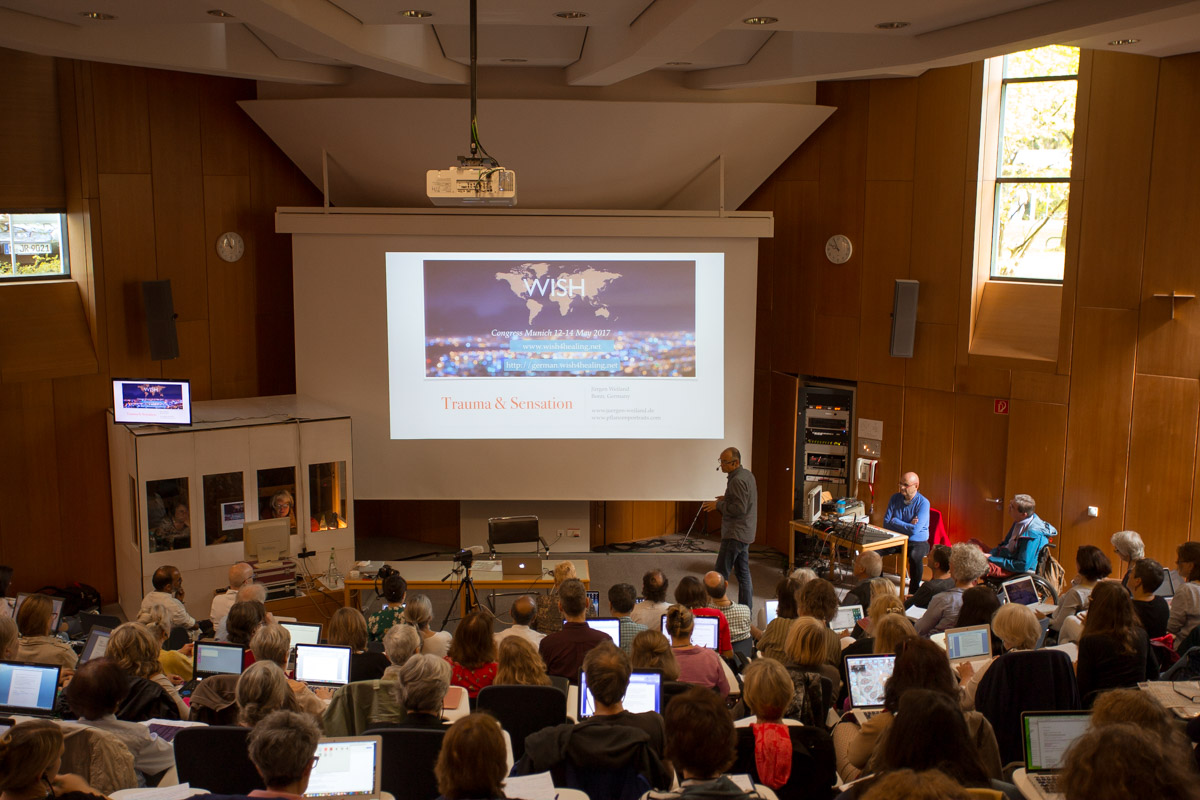 With the title “Scared to Death” Jürgen Weiland showed an acute psychological trauma in an otherwise very resilient young woman. She had mistakenly locked her one-year-child in the car and was so disturbed by this that, even weeks later she was suffering suffocating coughing attacks with urinary incontinence and cramps in her entire body. When talking about the experience she immediately begins weeping. Frantic from shock is the typical sensation of the Loganiaceae family – the situation of crisis corresponding to the typhoid miasm. The healing remedy here turns out to be the well-known Nux vomica. As usual Jürgen Weiland embellished his presentations with stunning photos.